The Occultist.
"Witness the infernal and blasphemous power of the void!" 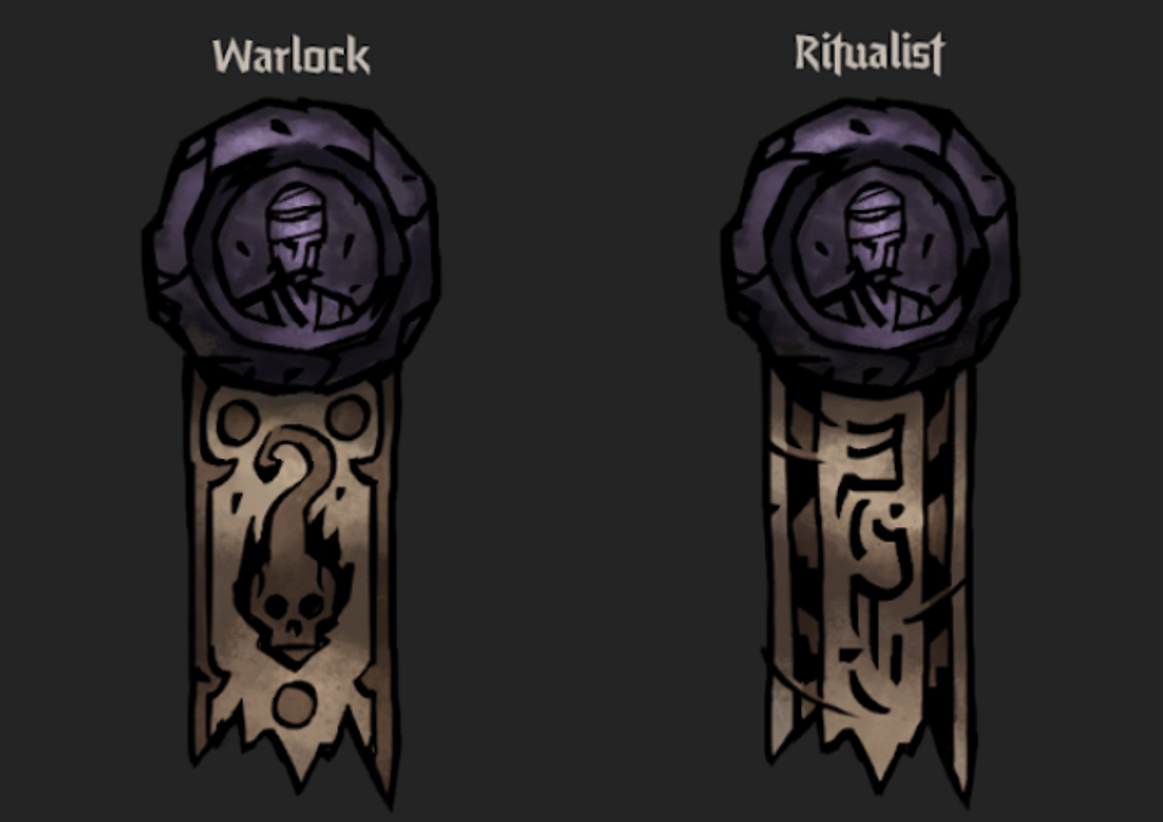 The Warlock path takes advantage of the Occultist’s ability to wield occult energies, allowing him to keep his distance from enemies while dealing increased damage. However, he must be wary of any incoming ranged attacks, as his focus on conjurations tax his health.

Warlock Occultists lean into the glass cannon role, having significantly reduced HP and an excellent boost to their ranged – Abyssal Artillery, Daemon’s Pull, The Burning Stars – attacks.  Their curses count as ranged attacks as well but 50% of nothing (or nearly nothing) is still nothing.

The 33% chance to gain Unchecked Power at the start of each turn presents an opportunity to make frequent, repeated use of The Burning Stars, particularly if you feed the Combo token it generates to Sacrificial Stab or Binding Shadows, though the latter may move you out of the safer back ranks.  With a little luck, you can roll out The Burning Stars on every other turn.  If you add Chaotic Offering to the mix, there’s a chance you can use it several turns in a row!

If you haven’t unlocked The Burning Stars, Abyssal Artillery still gains a reasonable back row damage boost on this path and it can use the Unchecked Power to become a double Stun.

Did You Know: The Burn DOT associated with Unchecked Power cannot be resisted, so letting unused Unchecked Power accrue can become a serious issue!  Try to keep at least one skill equipped that can easily consume it before your already limited HP pool goes up in self-inflicted flames.

Raven’s Reach Trinkets are an obvious pick if you want to focus on maximizing damage but that low HP and chance of self-immolation means you might want to consider something like the Hint of Home or Befuddling Sundial to reduce the odds of your Occultist’s life reaching a sudden and fiery conclusion instead. The Buttressing Band will help him weather some attacks if you don’t have a Hero who can Guard him.  Sparkleball is a solid pick if you’re focused on Abyssal Artillery, while Adrenalizing Ash can drive that first strike of the fight (turn 2 Burning Stars?) to even greater heights. 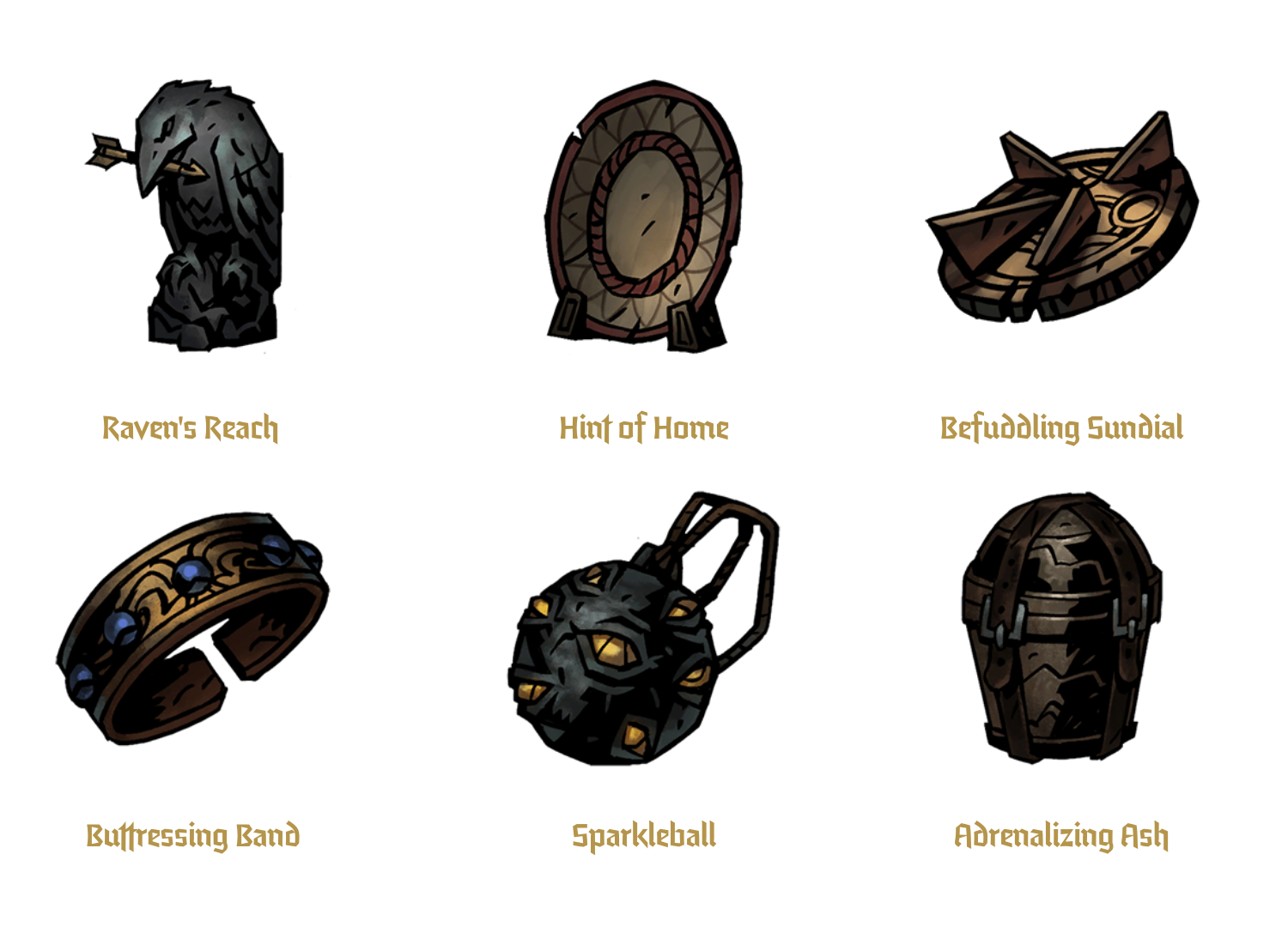 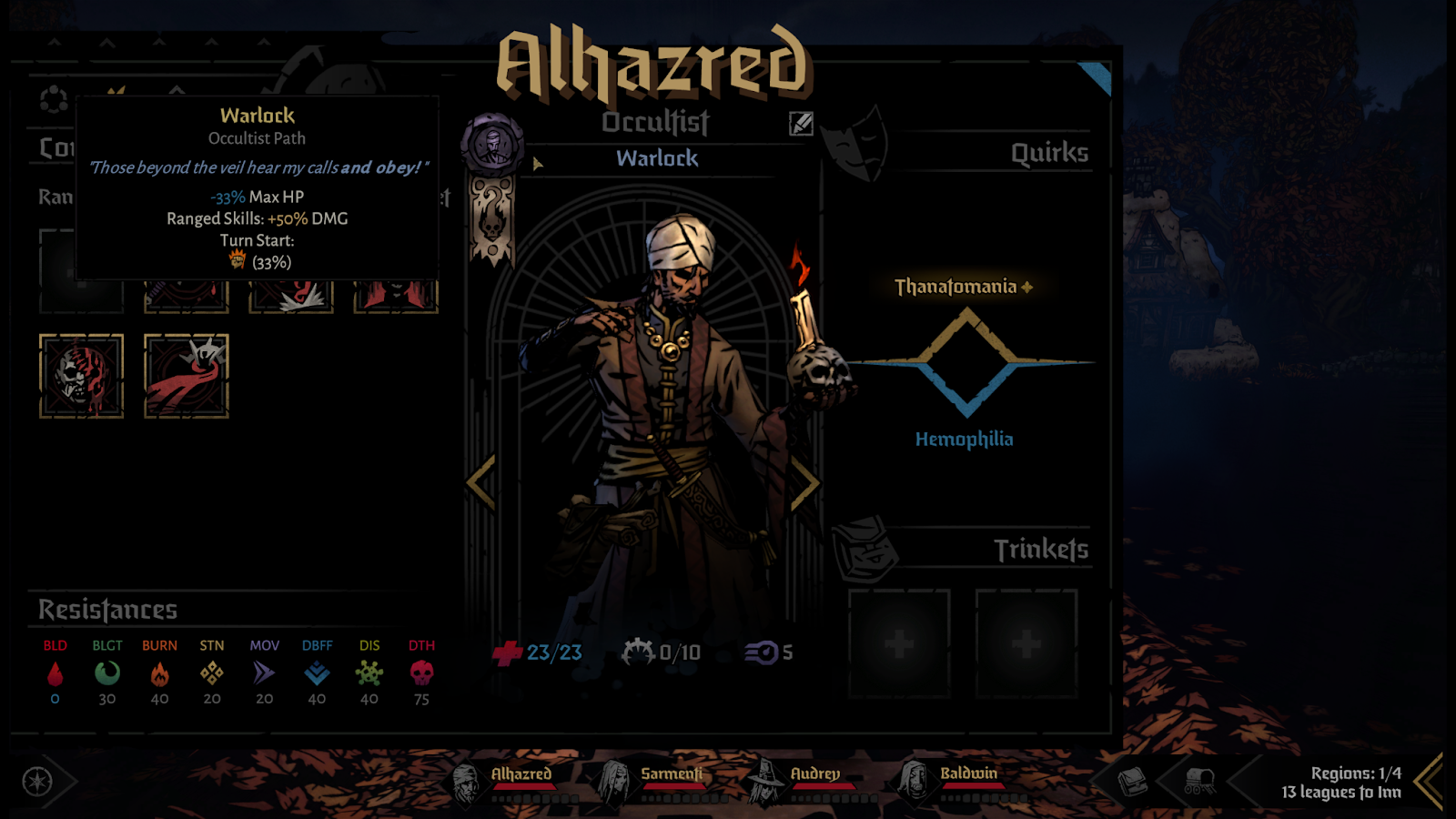 With The Ritualist path, the Occultist turns to incantations, simultaneously increasing curse damage and healing skills. The Ritualist Occultist's flexibility makes him a valuable addition to the team, but unfortunately this also makes him more vulnerable to oncoming attacks.

Whereas the Warlock Path focused on ranged attacks, the Ritualist Path is all about the strength of your blade at first glance.  Sacrificial Stab gains a staggeringly large enhancement, making it all the easier to generate Unchecked Power off of kills, which conveniently feeds into Wyrd Reconstruction’s buffed healing.

If you’re the type that likes to run your Occultist as a primary debuffer, his curses – Weakening Curse and Vulnerability Hex – can provide useful Tokens.  While Strength will only have value if you’re weaving in damage skills, CRIT Tokens will allow his debuffs to penetrate resistance and Dodge+ Tokens are excellent for keeping him out of trouble, particularly if he’s further forward in the ranks to make use of skills like Anamnesis.

Vulnerability and Block Tokens like to cancel each other out, so the negative side of the Ritualist Path can potentially be avoided through use of Trinkets like the Bouncer’s Belt.  If your Occultist is a debuffer, Wolfsblood Trinkets will keep him in prime initiative order.

Gnarly Knuckles Trinkets are clear picks if you just want to land Sacrificial Stab damage but the Unchecked Power you produce can also fuel Anamnesis, which is an excellent skill to use in conjunction with any Trinket that applies additional effects – the Dead Ringer would get 4 chances to roll Stun! 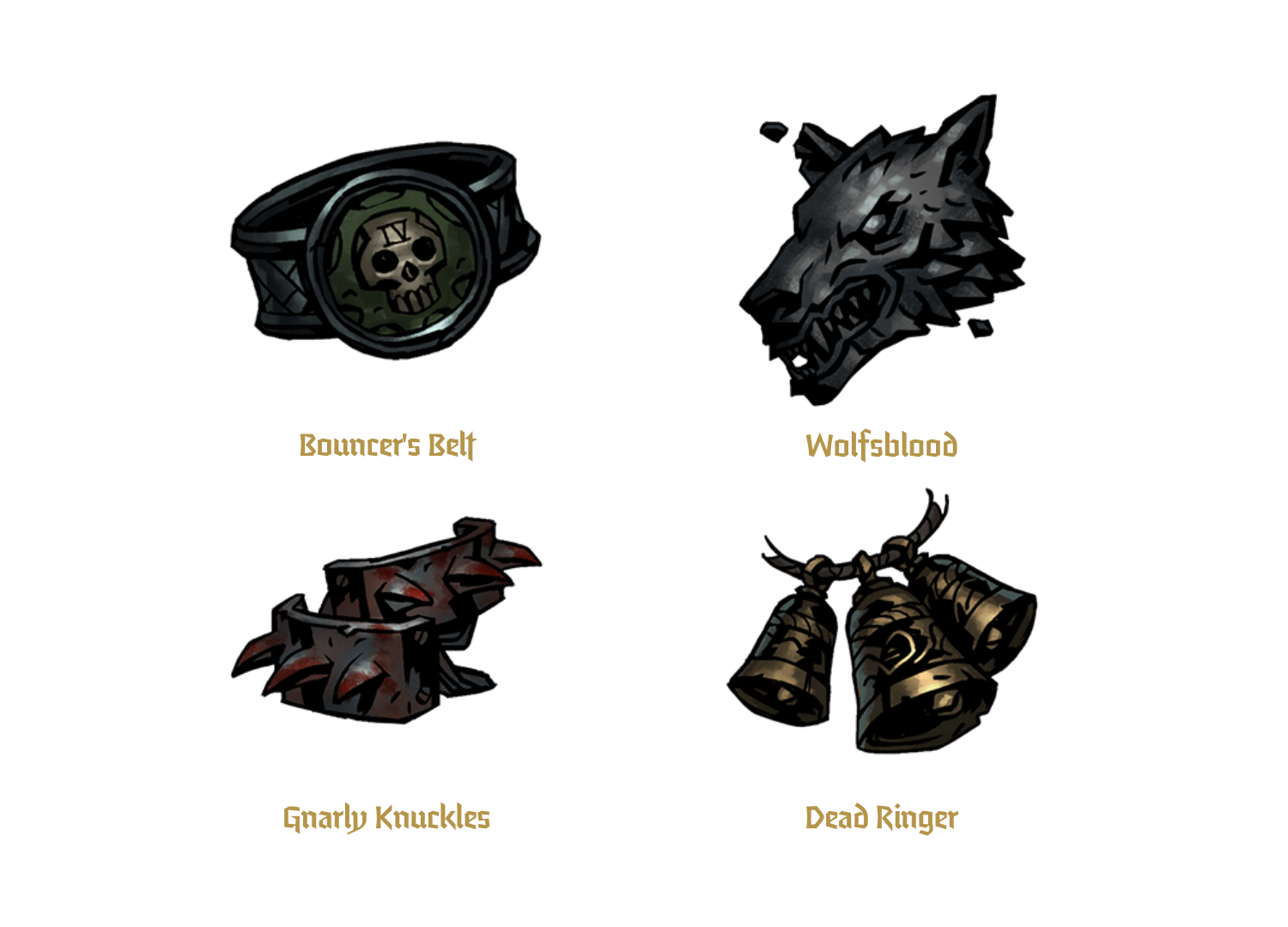 The community agreed that the Warlock path spoke to them the most. On Twitter, Warlock had 55.8% votes and 44.2% for Ritualist. On Discord, Warlock was favored with 108 votes versus 49 votes for Ritualist. 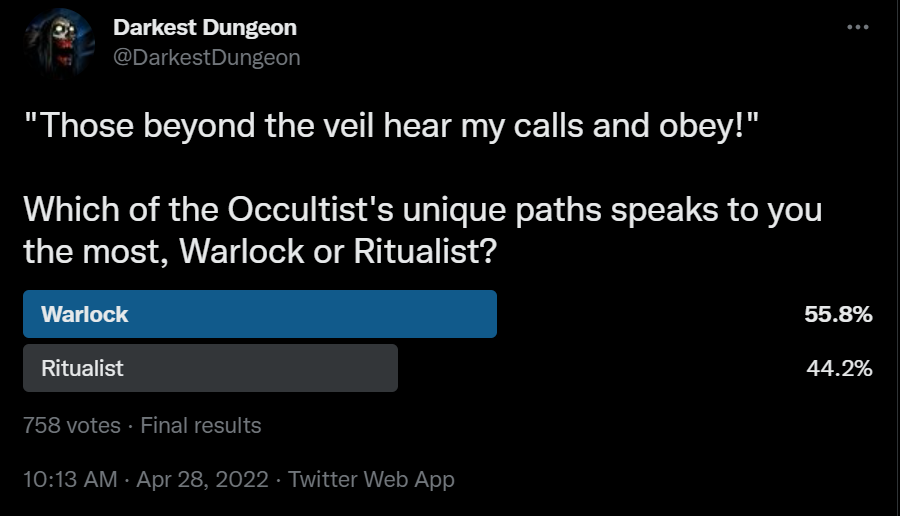 Warlock is really fun, but I find him to be unreliable and quite the liability if there's no one to protect him. 33% HP is a LOT. Ritualist just fits my preferred playstyle of doing more healing and better debuffing. And if I have to panic sacrificial stab, double damage is nice. - @crowboyo

Both here I think are very unique and fun play styles.  - @Friendlybot9000 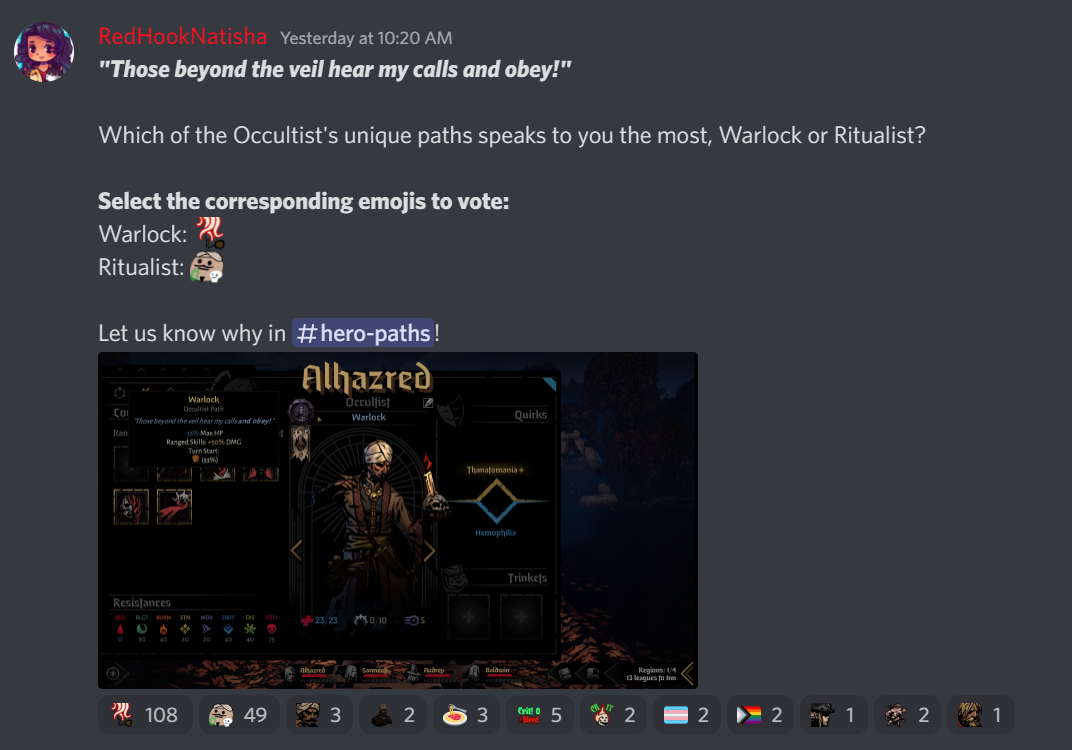 I love both of the paths but I love Ritualist even more; the idea of his cursing skills granting tokens is super interesting and fun. The Sacrificial damage is wacky (in the good way) and presents him viability in rank 2, which I have been taking advantage of whenever possible, although I wish it also translated somehow to Binding Shadows as it is a somewhat underwhelming skill (or at least to me it is)
Warlock just kinda puts him in rank 4 and makes him the Anti-Backline. Not really a bad thing because it's so fun to hit so hard, though.
I think Ritualist could probably have some interaction with Chaotic Offering, but that's just extra. - Koffee

Occ has two fun, almost balanced paths. Ritualist is very strong and has an honestly very minimal downside. Having an attack that does leper damage that can hit rank 3 is extremely powerful and the healing skills are just the cherry on top. Warlock is... interesting, you could say, since -33% max hp on a character that requires him to damage himself to get the value from ranged damage buffs is pretty crippling, and I honestly have no idea how they looked at ravager and then back at warlock and said "yeah this is balanced." but I digress, +50% damage on burning stars - also very powerful, up generation is very good. If you get even one power passively generated on round 1-3 it allows you to stars twice in a row if you offering round 1. Overall, ritualist fun, warlock more interesting in a game flooded with op paths, since it has an actual downside. - Halltaker

I feel like, with +dmg on Melee attack and +healing, Ritualist is too close to Surgeon PD. - Exurciel

Ritualist offers a lot of flexibility in what you want an Occultist to do - Sac Stab's an effective and flexible damage option (and when upgraded can even enable Untapped Power abilities with one lethal stab on a marked target), his already useful debuffs can get you additional value in positive token generation, and even Wyrd can heal more  if you performed the proper rites before you booted the game up today.  - BeardBroken

Two heroes are left! If you would like to vote on which hero we write about next, come over to our Discord server! 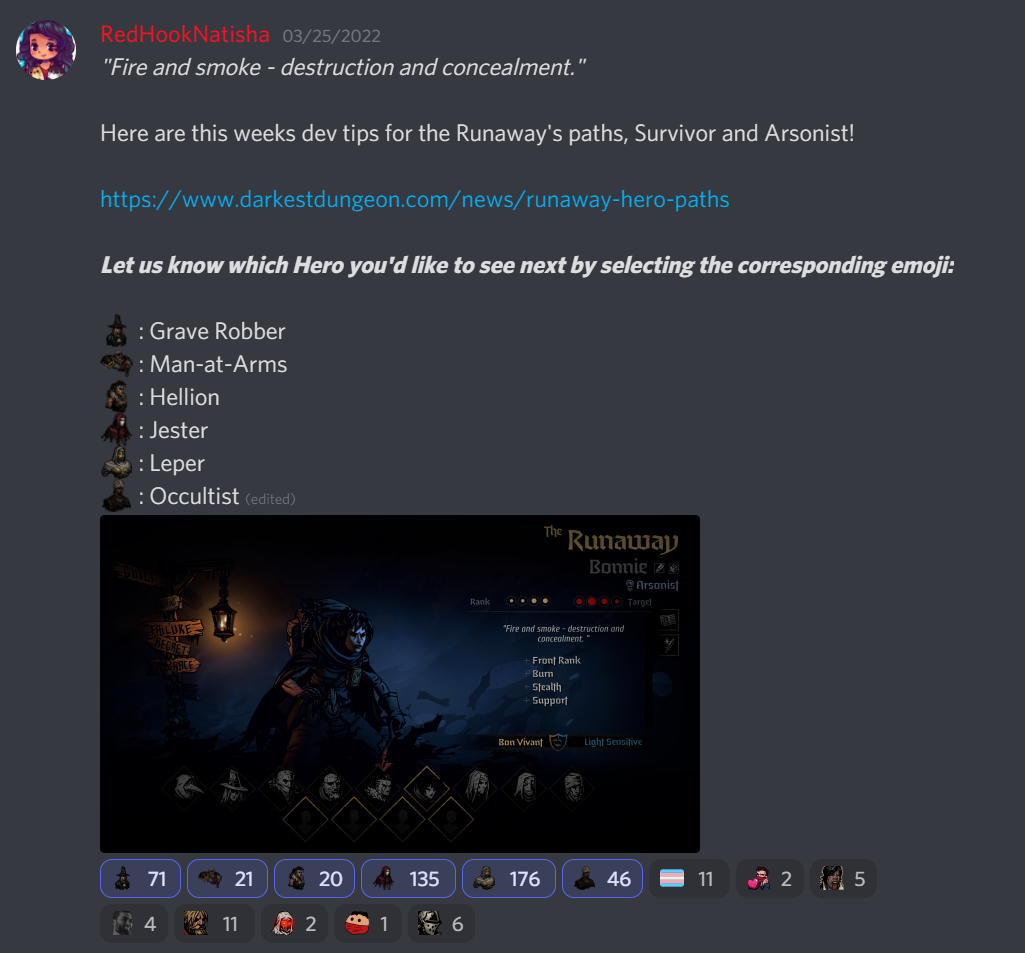 We would also love to hear your thoughts on the Occultist’s paths, how it’s changed your playstyle, what trinkets you use, and any suggestions you may have. The best way of providing feedback is to join our Discord server where we have a dedicated feedback channel.