At each journey's onset, a moment of respite. Rest your weary bones, warm your face in the candleglow, and remember the world as it once was...

The Altar of Hope (coming soon) 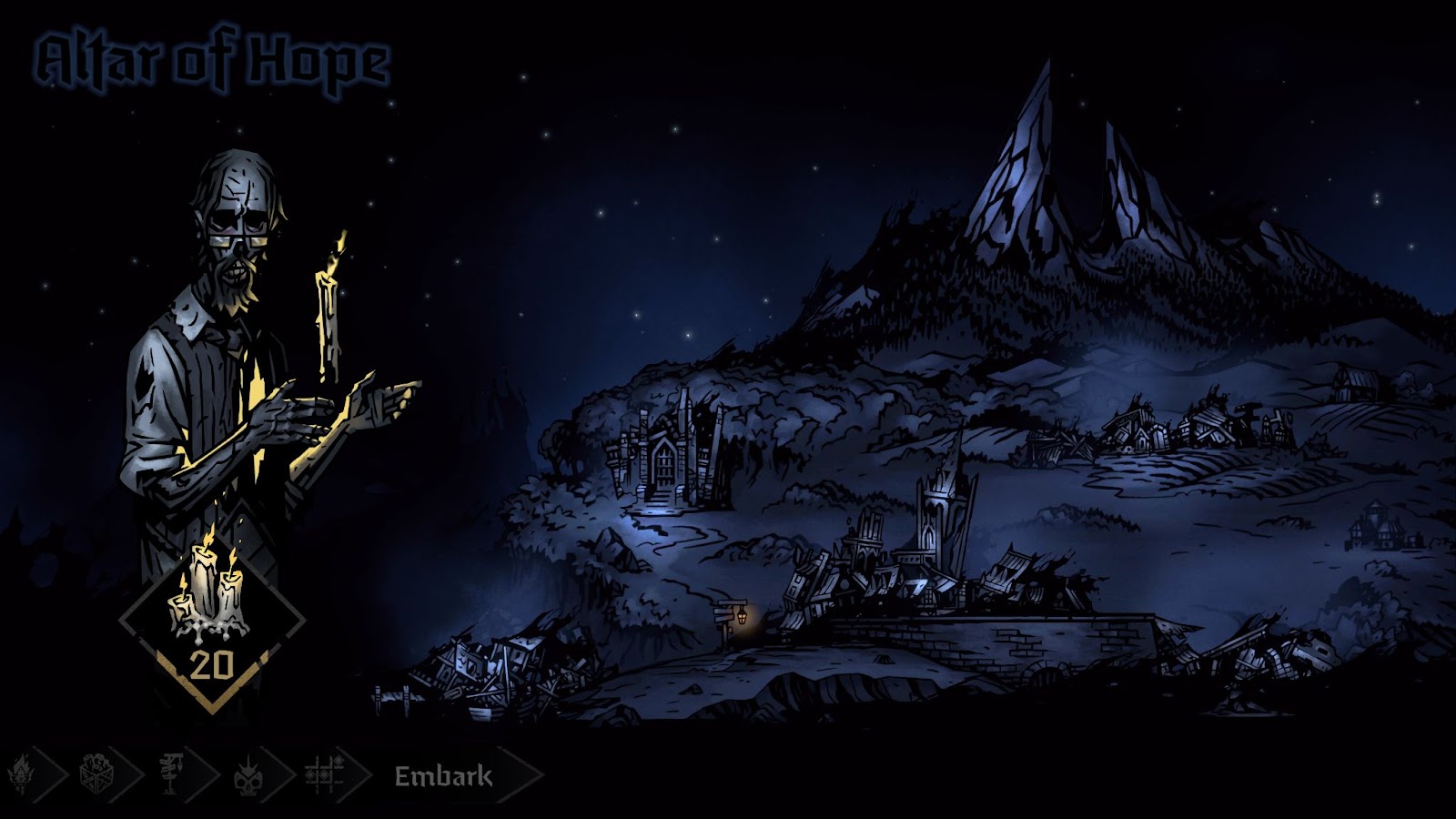 Hope allows you to remember the world as it used to be, keeping a vision of a simpler time alive…

The upcoming Altar of Hope Update introduces a massive new progression system to Darkest Dungeon II which allows you to invest in upgrades, perks, and unlocks that suit your play style and strategy.

On your Expeditions, you will collect Candles of Hope by completing objectives, progressing through areas, and defeating evils along the way.

Candles will only ever be earned through playing. They cannot be purchased.

In true Darkest Dungeon fashion, the best results come from daring deeds. You’ll also need to choose when to take a safer path.

The best rewards can be gained by making it all the way to the Confession boss. Of course, this is not always possible. Fortunately, Candles can be earned with incremental successes as well.

Ultimately, the decision of whether or not to press forward after a moment’s sanctuary at the Inn should be something that weighs heavily when tending to your party and surveying what challenges lie ahead. There is no shame in ending your Expedition here, carrying your Candles home, and spending them on upgrades at the Altar. It is crucial to recollect more of what has been forgotten to the darkness. Eventually, you will find yourself making it farther and farther on each journey, until you ultimately reach the Mountain.

The Altar of Hope

You can recall it if you try - amber glow suffusing the city's window panes, the soft crackle of a fire in the hearth, the lap of gentle waves against sand. This kingdom was imperfect, but it was ours. Now it stands in ruin…until you can invest it once more with Hope.

At the beginning of each journey, you will visit the Altar of Hope. This is where you invest your Hope (Candles) in one of the four regions detailed below.

The choices you make generally help not only your current quest, but future Expeditions as well. Through time and effort, you will give yourself better and better chances to conquer your failures. 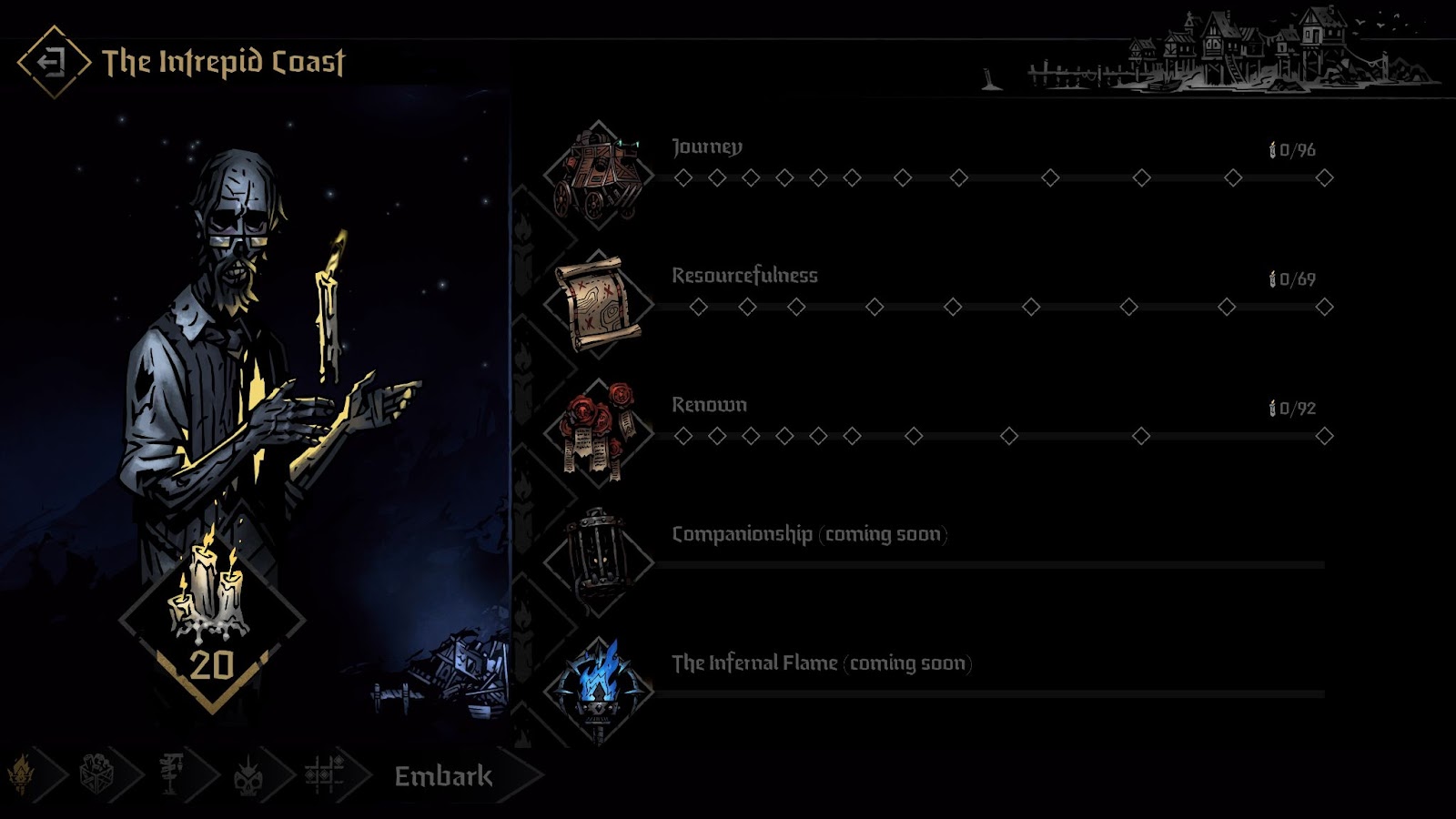 The Intrepid Coast offers a mixture of functional and aesthetic upgrades, such as bonuses when reaching certain locations, beginning runs with greater resources in-pocket, increased inventory space, and more. These boons are permanent once unlocked. 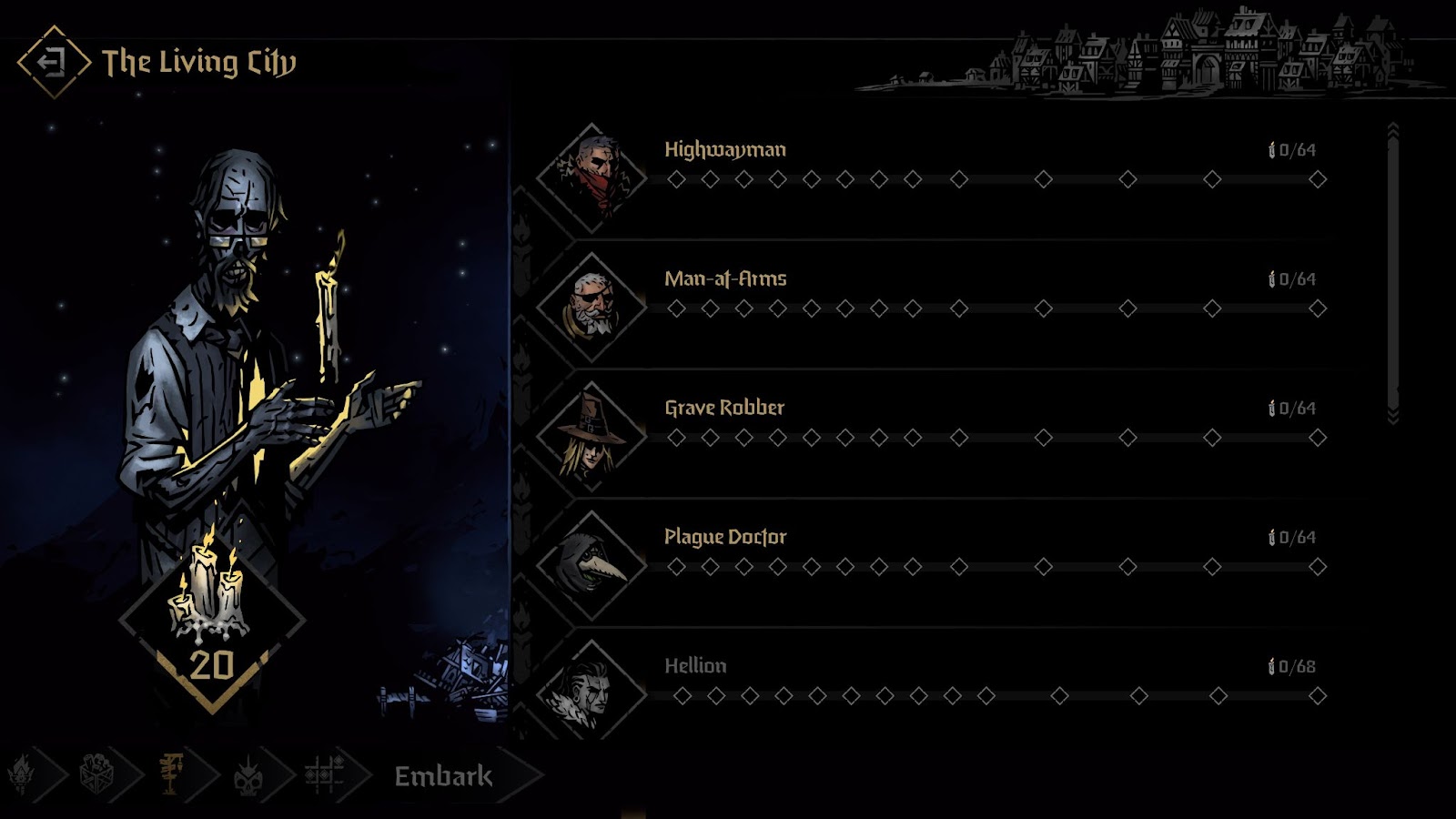 The Living City is where you unlock heroes, permanent buffs, and trinkets, and some other surprises. This is also now where hero paths are unlocked. As you invest Candles along each hero’s track, their chances at surviving will increase dramatically - note the increased deathblow resist on offer. 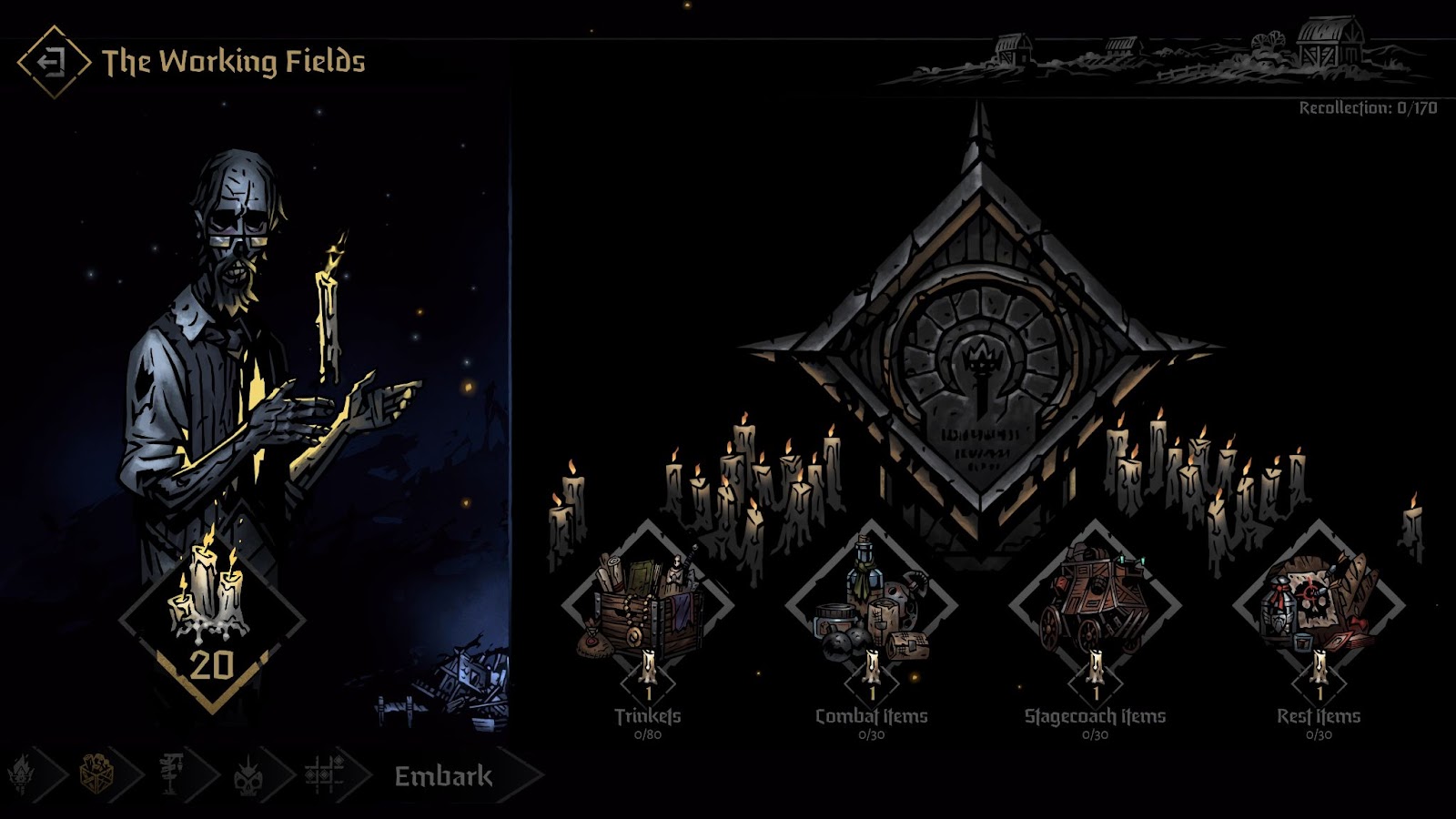 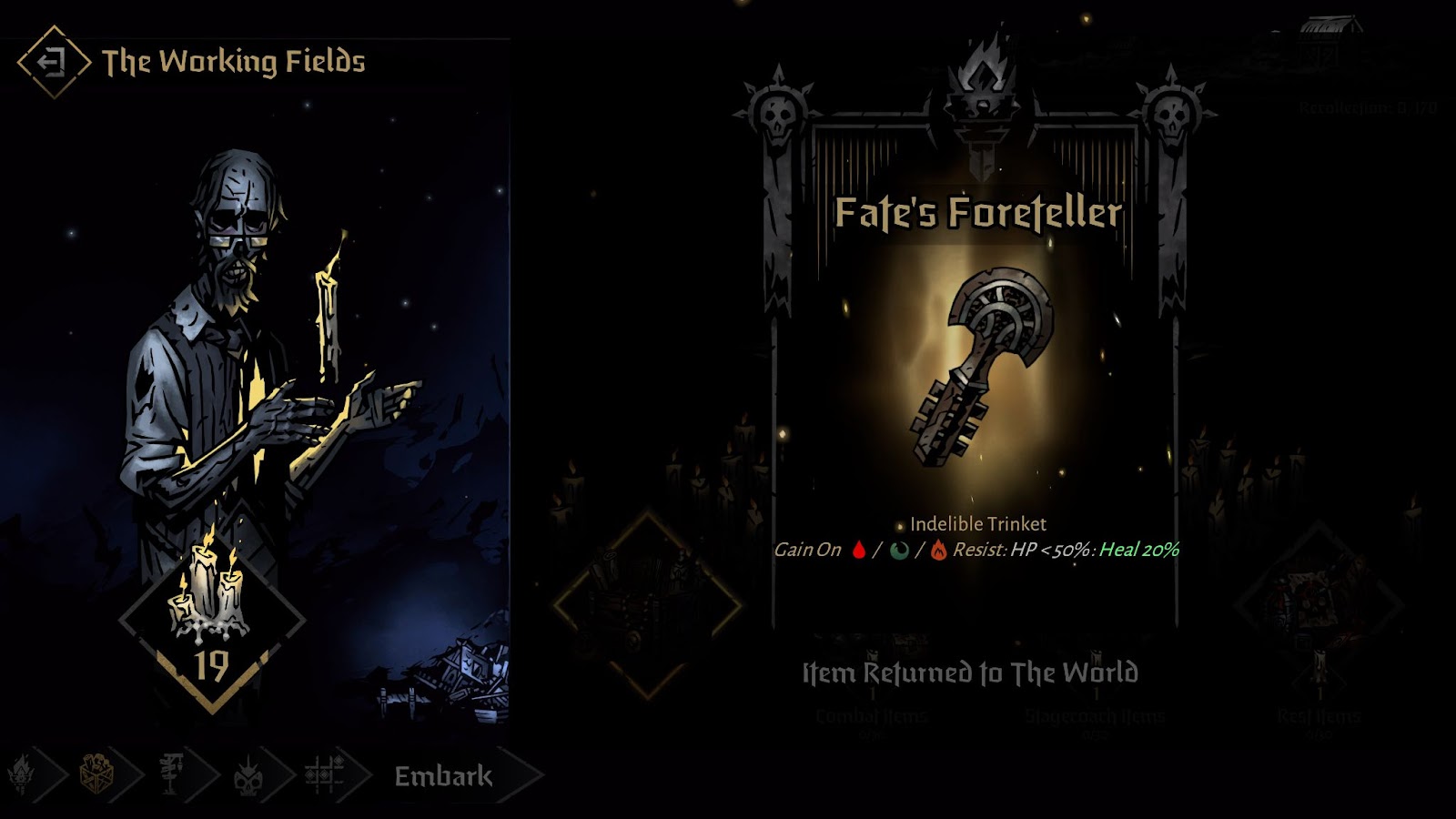 The Working Fields is where you can expand your available pool of items - stagecoach upgrades, trinkets, combat items, and Inn items can all be discovered here. Once unlocked, an item can be found in all future expeditions. You will also have that item added to your inventory immediately for the current expedition.

If you find that the variety of trinkets and items that you are looting isn’t particularly diverse, give a thought to tools of iron and invest Candles here. 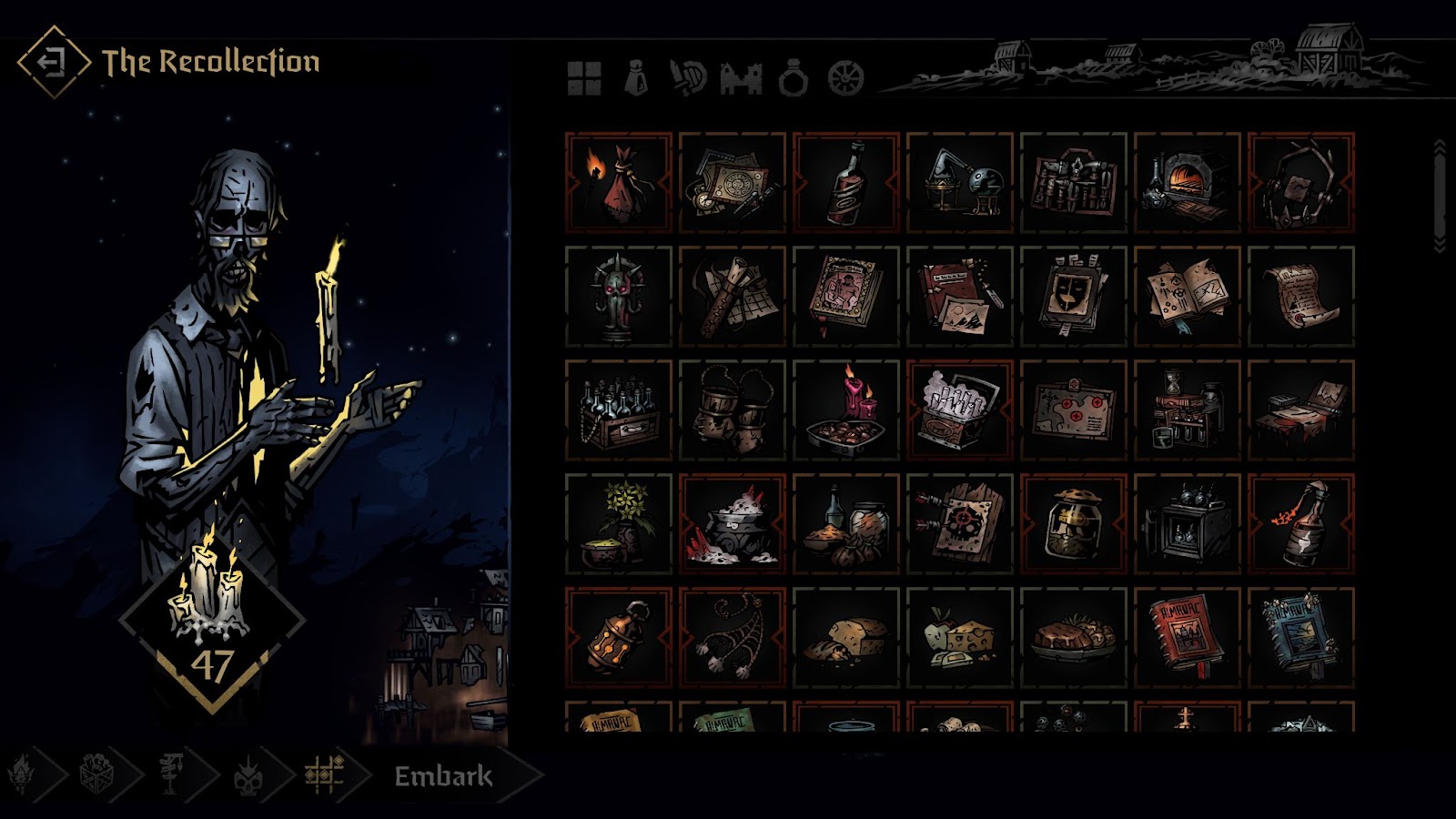 The Recollection view will show you all of the items that you have unlocked. There are hundreds in all! 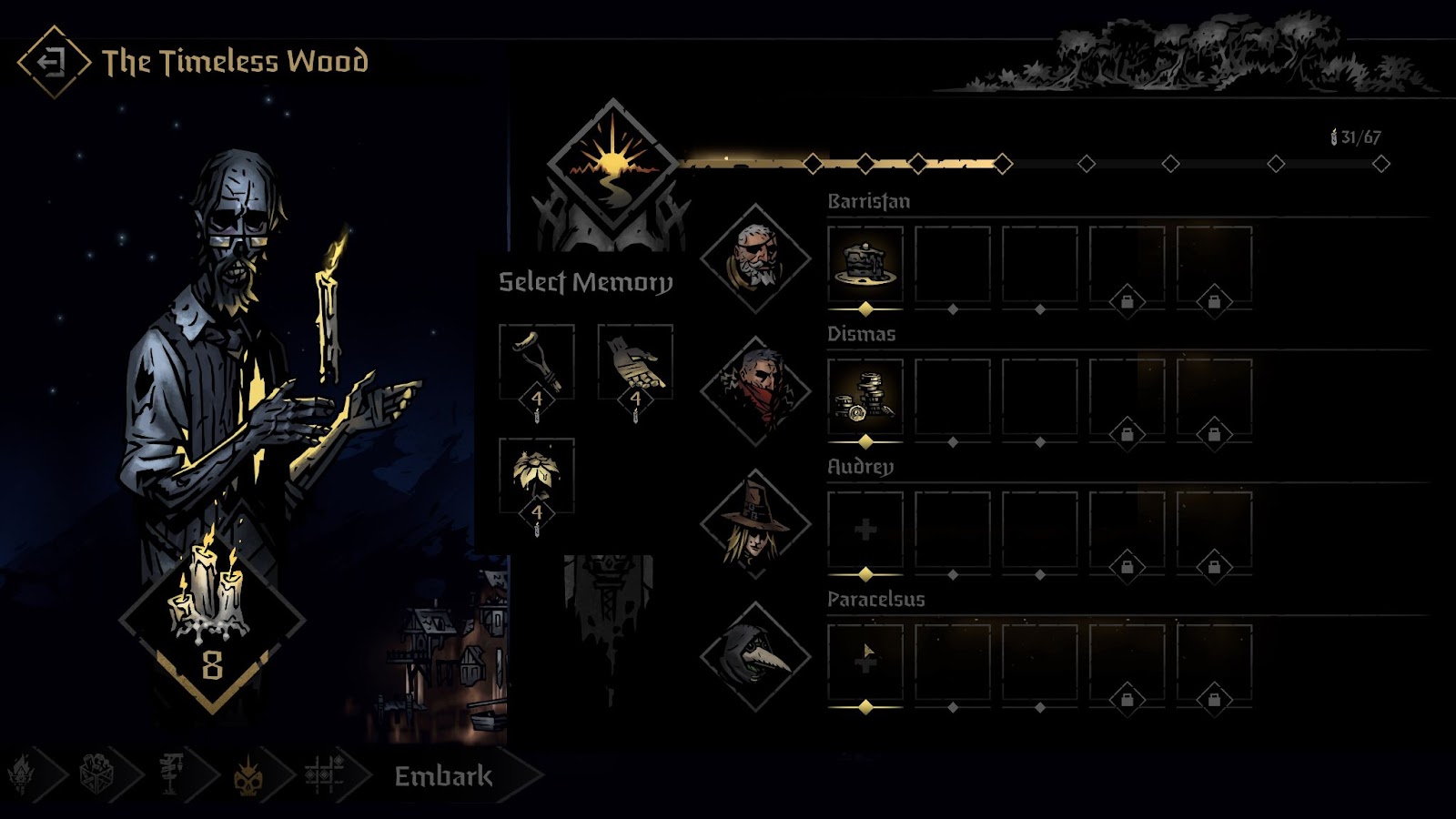 The Timeless Wood is where you can spend Candles to unlock Memories for each of your heroes.

“In our endeavors to recall to memory something long forgotten, we often find ourselves upon the very verge of remembrance, without being able, in the end, to remember.” - Edgar Allan Poe

Our memories have power over us, and as such, they grant powerful benefits. However, despite its potency, memory is also fleeting - Memories only last for that hero's specific life and are wiped upon death. Memories are a more complex mechanic than the other Altar unlockables due to their ephemeral nature, but ultimately, this will prove rewarding to a canny and experienced player.

The goal of any Expedition is to vanquish the Confession boss at the final stage, and doing so comes with a reward beyond mere recognition and triumph over one's worse nature: any heroes who survive the final battle will retain their Memories. While their Mastery level will be reset, surviving heroes will also keep their Hero Path, quirks, and name. Plus, heroes who survive a final boss battle can now have an additional Memory invested. These characteristics will persist until the hero's death. Persistence, while it lasts.

A new great challenge emerges, for those willing to tackle it: defeating all five Confession bosses in order with the same party of four heroes, all of whom are filled with Memories. 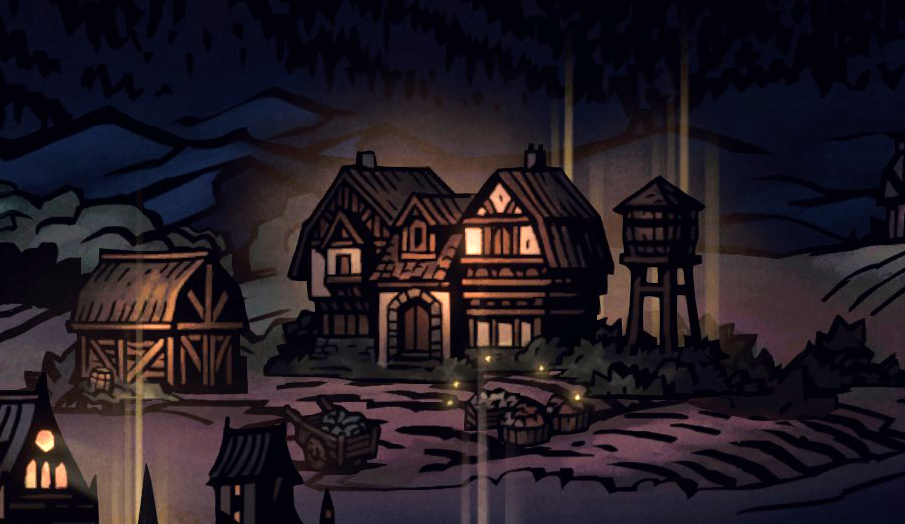 As you invest hope in the Altar, the view of the Kingdom will gradually become as it once was: whole and majestic. Perhaps all can be put right, after all.

The Altar of Hope update will be available on the experimental branch starting early next week. Once we are satisfied with stability, it will go live to the main game branch after that.