New avatars of the Loathing demand your supplication!  Join the denizens of this crumbling world and worship the yawning void.  Hear the demoniac piping of the Herald, prostrate yourself before the Altar, but gaze not upon the high Exemplar, for you are not worthy of such honors.

Three new enemies will be added to all the current locations in the game where Cultist monsters are encountered: ambushes, guardian encounters, and Cultist encounters. These new units will provide some much needed texture, variety and challenge to the game’s most sinister faction. 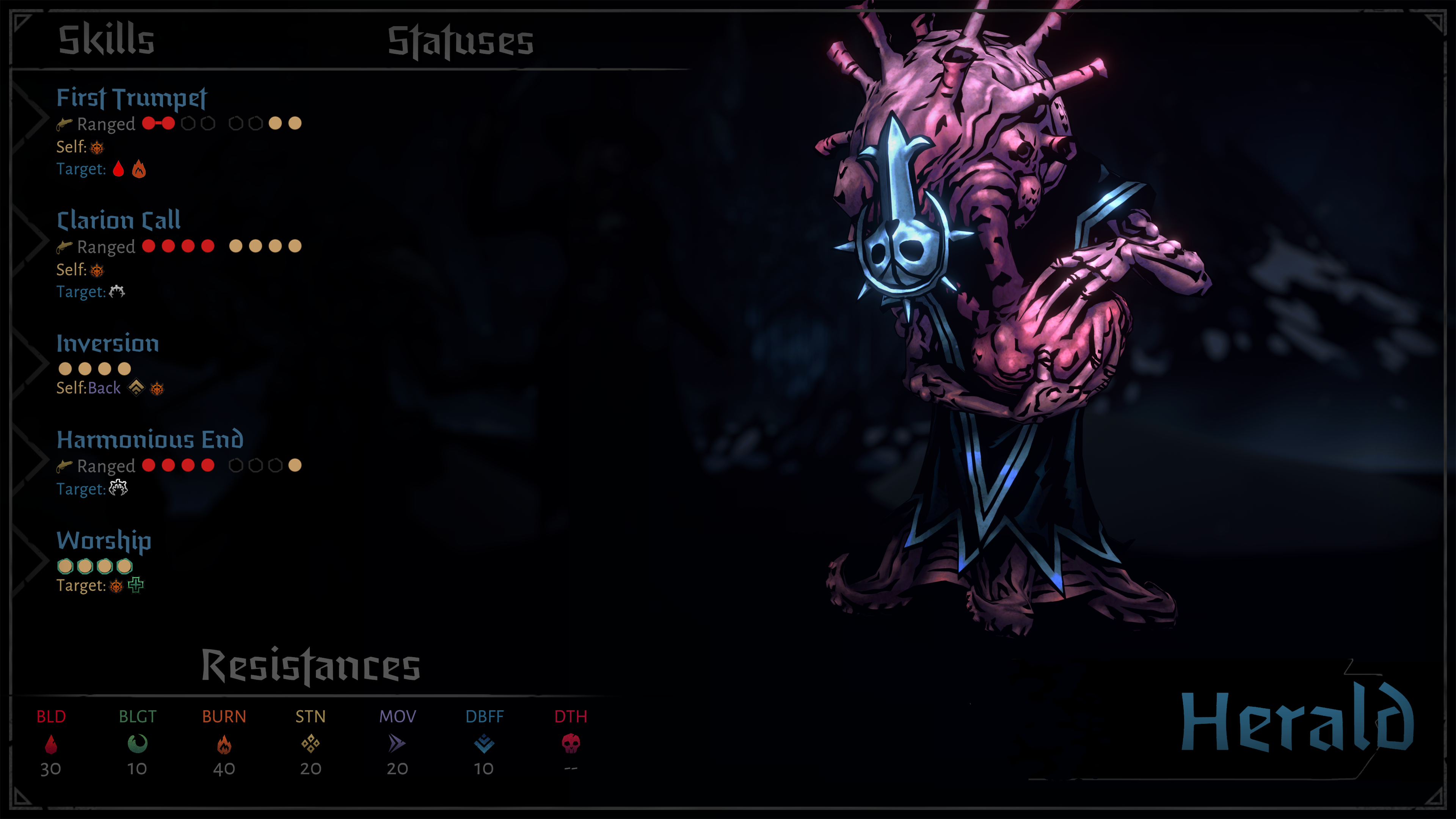 Hear now, the trumpet of the end!

The Herald is a back row combatant capable of high stress and token manipulation. Using its infernal instrument to strike dread and pain into the player’s party, the Herald also has a unique ability to absorb the negative tokens from the rest of the Cultists, to convert them next turn into positive tokens.

With Evangelists covering melee offense and Cherubs acting as debuffers, there was a clear role for the Herald to fulfill: ranged damage and stress burst.  An appropriate harbinger of the end times, the Herald packs a more direct punch than the harassment delivered by Cherubs. 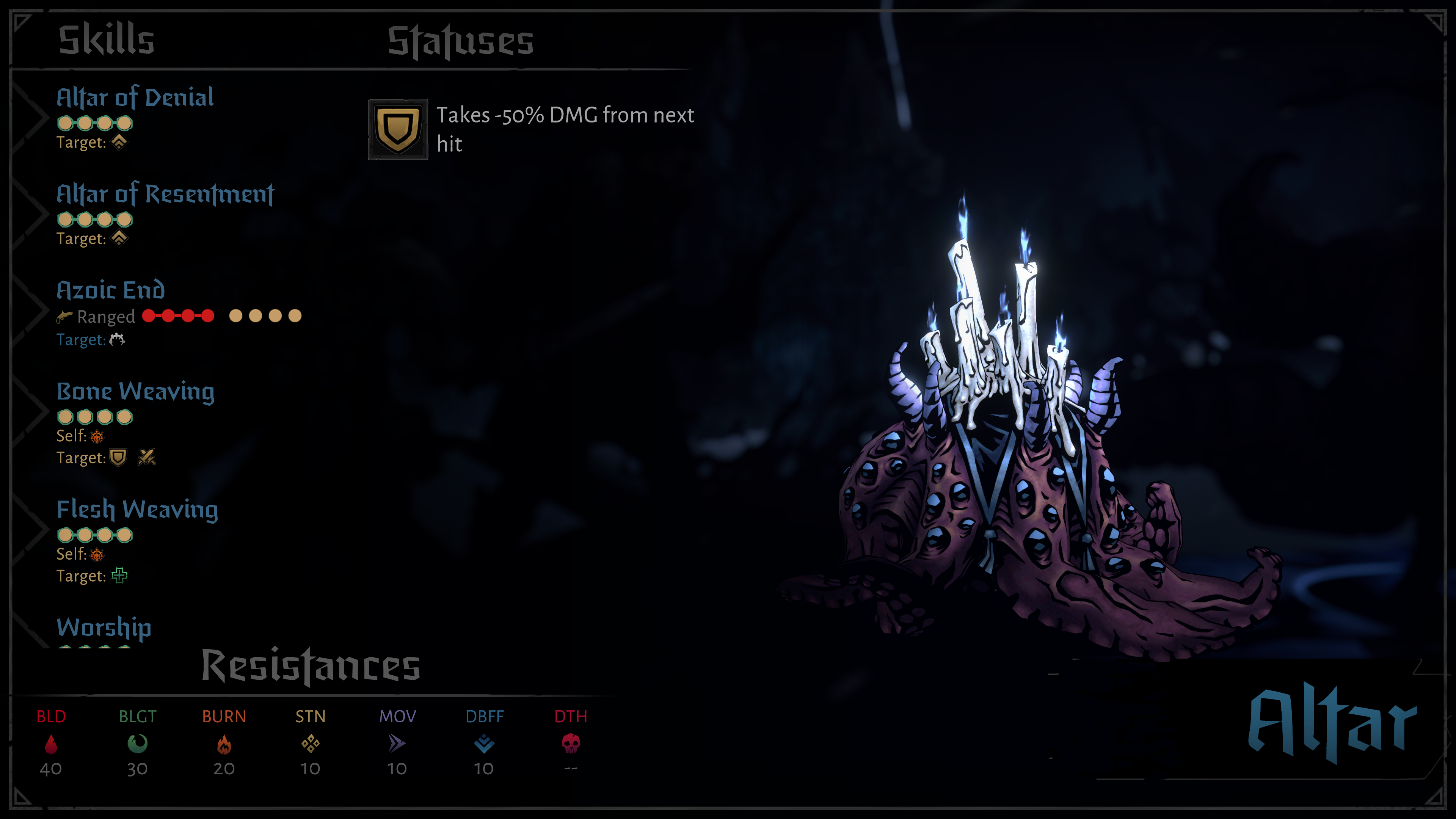 Offer of yourself, and be cleansed.

Fulfilling a vital support role within its faction, this writhing mass of tentacles empowers its hateful kin; buffing allies with single-target or group-wide blessings. A warning: do not leave the Altar unattended… 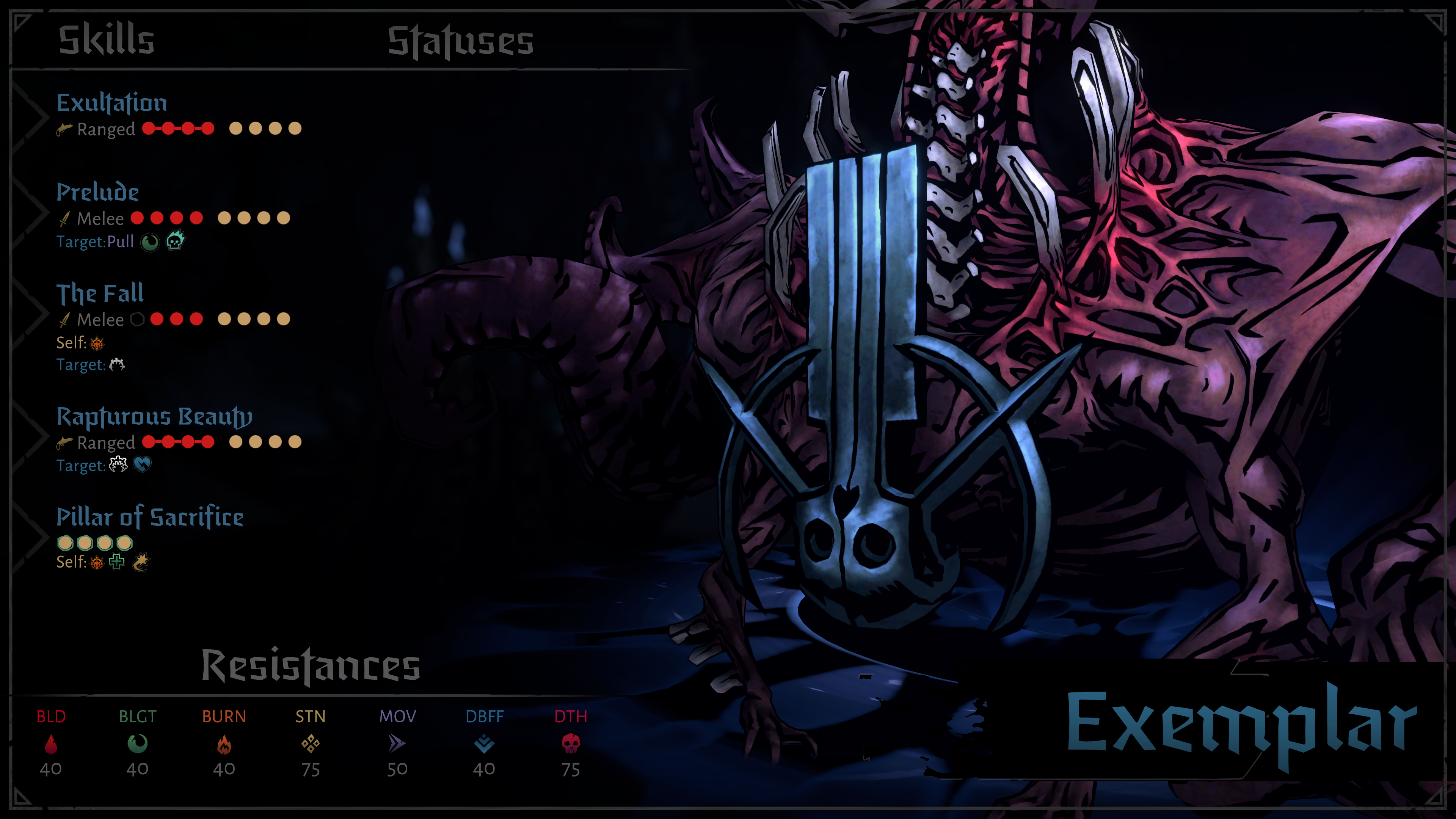 The Exemplar is an apex predator within its own faction; a Cultist so powerful that it could generate its own worship or consume lesser cosmic servants for theirs.  A Cultist capable of fueling its own wild Exultations, demonstrably devouring the world piece by piece.

The Exemplar appears before the third Inn, and again at the first Mountain combat encounter.  It is a massive (size-3) Cultist unit that, like other mini-bosses, gets an additional action per round.  A key concern in this encounter is finding a way to deal with the worship tokens that accrue throughout the fight. Once an ally has enough worship tokens, the Exemplar will consume it - gaining the worship, healing effects, and riposting.

Upon being properly worshiped, the Exemplar unleashes a massive attack on 2 random heroes and summons a fresh Cultist to join the fight!

With the Cultist faction growing in size and power, we wanted to both a)better reflect their presence throughout a run,  and b) ramp up the challenge at the end of each region.  As you approach the Inn, you will notice the Guardian encounters have had a striking visual and mechanical upgrade.  Notably, the Guardian encounters are now 2 fights long instead of 3. However, you can no longer retreat. You must push through and finish the entire Guardian encounter in order to reach the light of the Inn beyond.

We have also dialed up the severity of Cultist ambushes by including a Deacon or Cardinal in those fights. And, if you happen to reach full Loathing, you'll find yourself face to face with the towering Exemplar!

These changes better reflect the threat level we want the Cultists to represent.

Previously, Worship skill was functioning as a special type of Start Round skill, which meant that it could ignore certain token types (Stun/Daze) and DOTs.  In order to make managing Worship situations feel more tactical, we've converted it to a free action that now occurs as part of the Cultist's turn in the initiative order.  Since they no longer use it automatically at the start of a round, you have a window to finish them off before they get the chance.  However, be warned that multiple Cultists can also Worship within the same round now.

We are deploying this patch to Darkest Dungeon II - Experimental Branch today. And we ask all of our players to jump on and see how these new additions and changes impact your run. The feedback you provide has been a valuable addition to our team since we released last October, and we look forward to implementing even more in the coming updates.

If you do not have the Experimental Branch downloaded follow these instructions:

🔸 Go to your Library

🔸 Filter to show All games

🔸 Download the one that says "Darkest Dungeon II - Experimental".

🔸 When downloaded it will look like the one on the left in the image below.

You must remember the world as it was, if you hope to save it…

The next update will introduce an entirely new progression system, and is planned to release in September. We’ll share more details about this in the weeks ahead.