The Hellion.
"The spilling of blood - an offering to the Gods!" 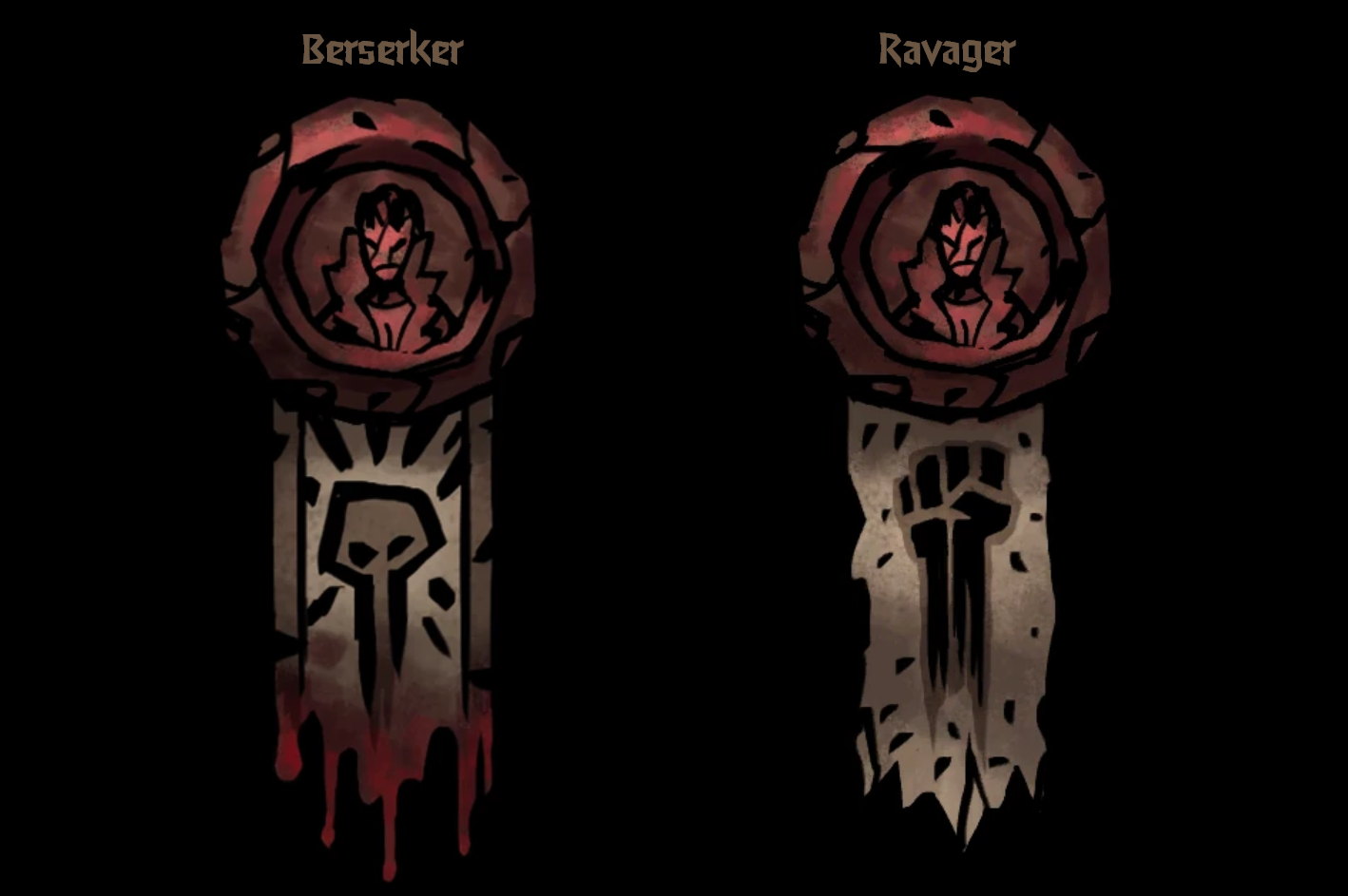 The Berserker path causes the Hellion to lose all control and sense of self, putting her in a frenzied state with heightened bleed chance,  bleed resistance, and bleed crit. However, in her hysteria Hellion is put at risk with a diminished HP.

Berserker Hellions ride the razor’s edge, sporting less health than normal but a greater resistance to death itself.  Her Bleed skills – If It Bleeds and Bleed Out – have enhanced CRIT rates and, similar to other DOT-driven paths, bypass a significant amount of resistance.

There are a couple of ways you can run a Berserker Hellion.  The obvious first option is to lean into her Bleed options, which allows her to reach targets in ranks 1, 2, or 3 depending on her own placement.  Using Bleed Out will quickly penalize her own damage and speed but the Bleed itself is unaffected; pile it onto whomever is unfortunate enough to be up front!

While Bloodlust looks like a natural support skill for this Path at first glance, its value will be much reduced if you’re relying on Bleed Out as your skill of choice since those Winded tokens will quickly override any benefits.

Alternatively, you could lean into the reduced maximum HP as this will also make it easier for her to reach the HP thresholds that trigger her innate damage buffs, amplifying the power of skills like Wicked Hack, Iron Swan, or Howling End.  The 20% bonus Deathblow Resistance will easily take her to cap with sufficient leeway to counter mild penalties from other sources, such as quirks or disease.

If you’re going that route, damage buffing trinkets from the Gnarly Knuckles line will maximize the output.  Avoid trinkets that regenerate health – unintentionally bumping yourself out of the innate damage buffs – and consider defensive trinkets like the Bouncer’s Belt or Buttressing Band instead.

If you expect to sport Winded tokens on the regular, trinkets that can apply additional debuffing effects such as the Sparkleball or Clarifying Carcanet pair well with Barbaric Yawp or Breakthrough and offer a secondary support role when bleeding the enemy dry is a less viable option.

Naturally, we can’t forget to mention the Beck and Call trophy’s doubling effect on Bleed DOTs! 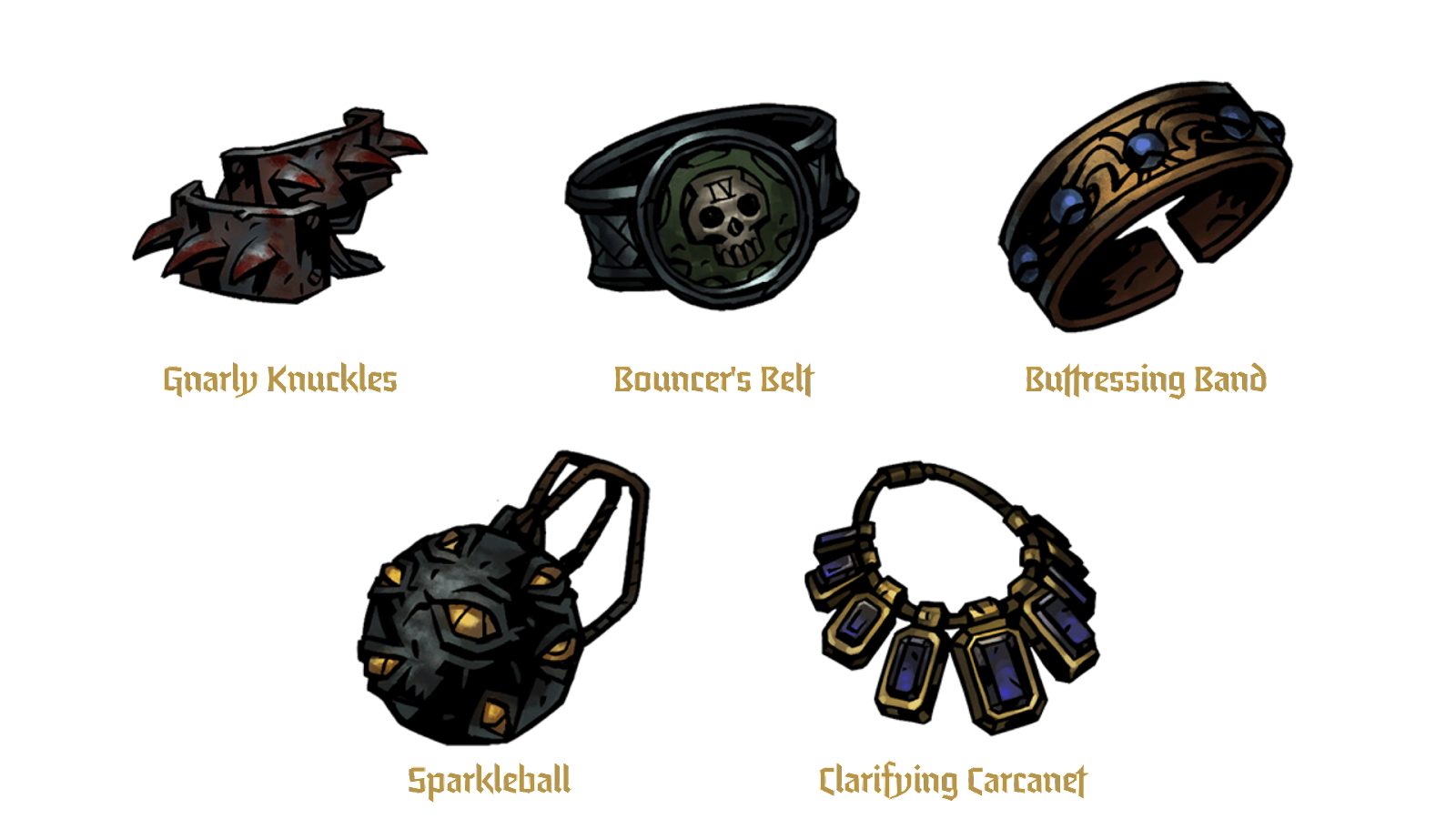 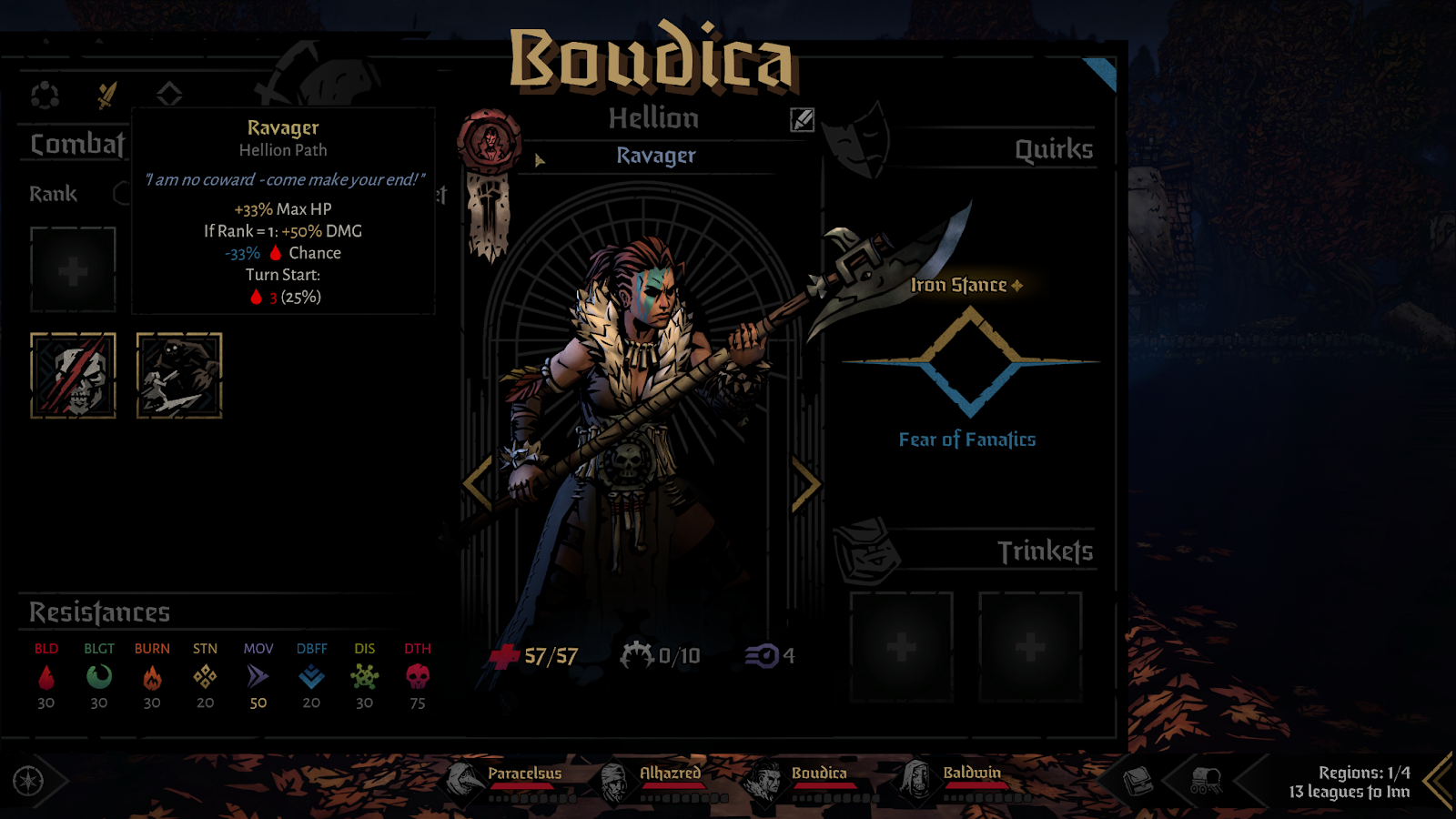 With The Ravager path Hellion has increased firmness of mind and will in the face of danger giving her greater HP and increased Damage when placed in rank 1. Unfortunately with this bolstered mettle she starts the turn bleeding and her bleed skills become nearly useless with decreased bleed chance.

While the Ravager’s Bleed skills are all but useless, her capacity for front line violence is unrivaled.  The rank 1 damage bonus makes Iron Swan an excellent way to dispatch troublesome rank 4 monsters, Wicked Hack gets a whopping +100% damage bonus if the target has Combo, and Howling End deals significant enough damage that the first Winded token will barely affect it.

Did You Know: The damage debuff from Winded is additive, so a Ravager in rank 1 will still be able to deal half damage (or full with a Strength token) when completely Winded.  It’s not optimal but it does mean that her damage can remain viable for longer than you’d expect.

The Ravager’s increased health pool makes it a bit more difficult to trigger her innate damage buffs but she can be a valuable Taunt tank, though you need to be careful when her HP is low since she may spring an unexpected leak at the start of any given turn.

Did You Know: The Bleed effect that a Ravager sustains cannot be resisted, so Bleed Resist trinkets won’t have much value.  However, pairing your Ravager with a Runaway can turn the self-inflicted Bleed into a source of healing.

If you have any other Hero in your party who can inflict Bleed, such as the Plague Doctor or Highwayman, the Bloodlust skill can net you some solid additional punch on top of everything else.

Since you want your Ravager to remain in rank 1, the General’s Dream trophy is one of your greatest assets.  In the absence of that, Clenching Claws can help her keep her place if you aren’t immobilizing yourself already with Toe to Toe.

Wounding Words will further fuel your considerable damage, while the Smoldering Hymnal can grant extra actions per kill – and your Ravager will be killing things.

On the other hand, there’s always True Entropy if you like to be surprised! 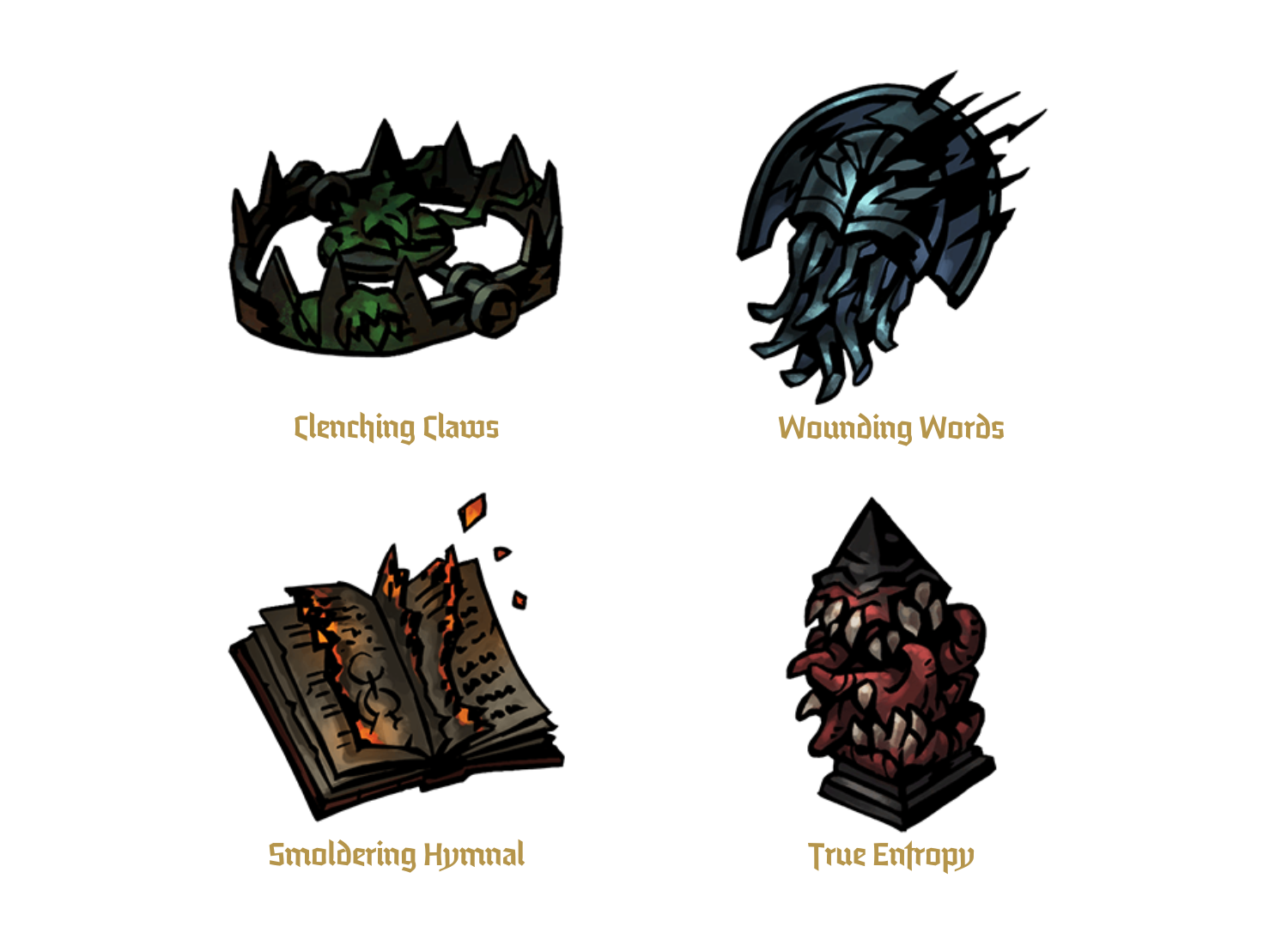 When put to a vote,Twitter and Discord were divided between Berserker and Ravager. On Twitter, Berserker took the lead with 61.6% votes and 38.4% for Ravager. On Discord, Ravager was preferred with 184 votes and only 26 votes for Berserker. 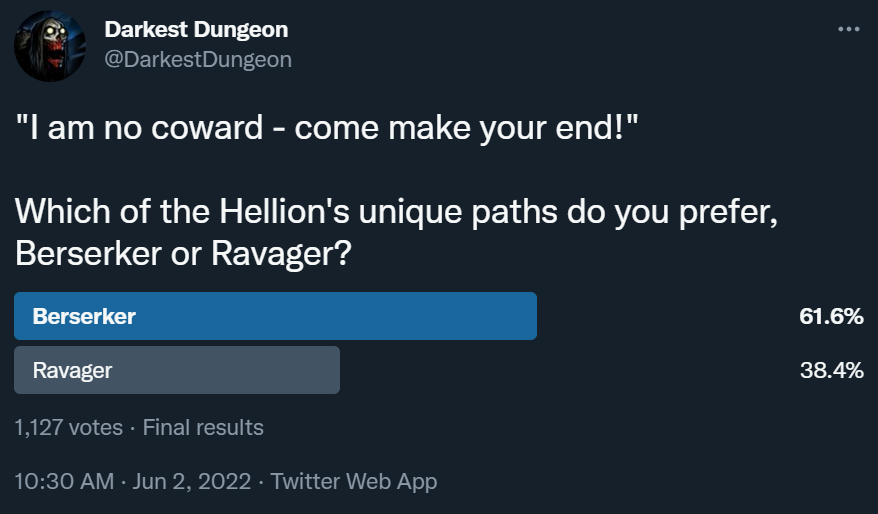 Ravager by far is the stronger path, as Howling End can 1 shot most enemies with the 50% damage buff in rank 1. Having a higher bleed chance is nice, but being restricted to only using one of her bleed moves because of positioning makes Berserker feel lackluster. - @RustyTusks

Hellion's strongest aspect is the turn 1 Howling End nuke a foe and as such Ravager is the much superior option imo. Iron Swan also becomes quite a potent skill as well.  - @Swiftsea96

DOT builds in general can be hard to justify, and with the insane damage and health buff that ravager provides, it's no contest that it's the best choice. The bleed skills are also weird positionally, so I like not having to think too much about where she is in the lineup.  - @crowboyo

Ravager is just far stronger.
Bleed out is nice with the added Bleed Chance from Berserker.
But the +50% damage in Rank 1 from Ravager is far stronger. Howling End -> Toe to Toe -> Howling End until everything is dead.  - @TKillidia

Berserker, despite the key issues with her two Bleed skills (and for the most part, the different playstyles that do not synergize together), is honestly fun for me. Beyond more frequent Bleed Crits, applying Bleed so frequently and reliably is incredibly destructive, especially with the new HP changes where a crit Bleedout will drain most enemies of a major portion their health. The reduced HP is... interesting, but the DBR increase is a bandaid that makes it bearable. - Koffee 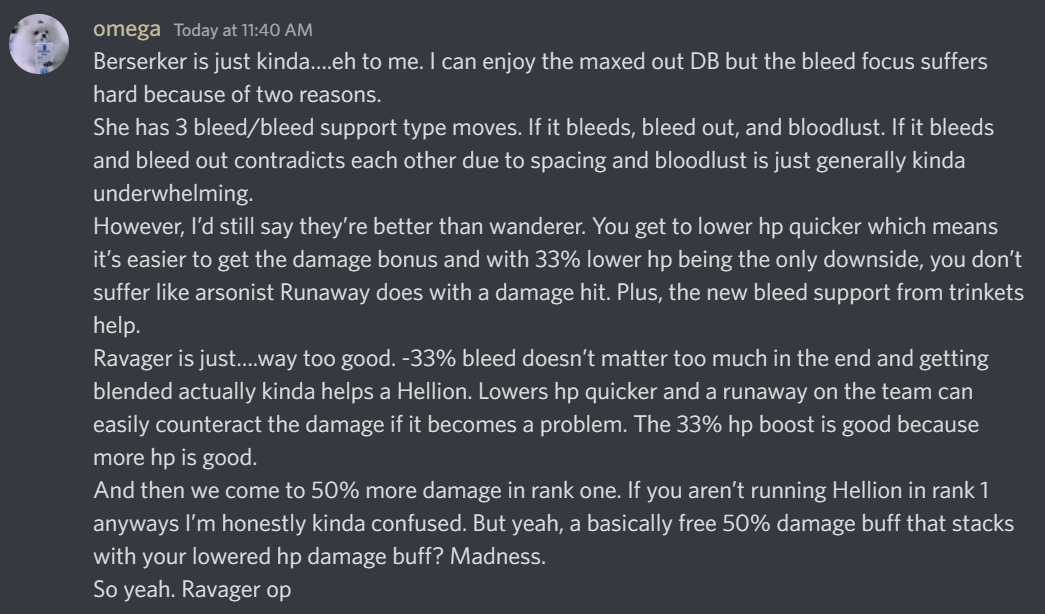 Ravager is far superior to berserker. Hellion already wants to be in rank 1 because of her trinket, and this just gives her even more damage. Bleed out is a good skill, but bleed out can't be used with if it bleeds, and neither compare to the damage potential of howling end.. - ShuffleFM

Oh yeah Ravager is looking good. Could get easy heals from Cauterize. - Otzdarva

Only one hero next! Next week we will talk about Man-at-Arms. If you would like to be more involved with discussions on hero paths come over to our Discord server! We would love to hear your thoughts on the Hellion’s paths, how it’s changed your playstyle, what trinkets you use, and any suggestions you may have.