This update is a wholesale rework of the fundamental underpinnings of Darkest Dungeon II’s metagame & progression.  Your current Hope score will be reset, resulting in a wipe of item unlocks & hero availability.  Any in-progress expeditions will also be reset.

You will be awarded 20 Candles of Hope to expedite your exposure to the Altar of Hope. 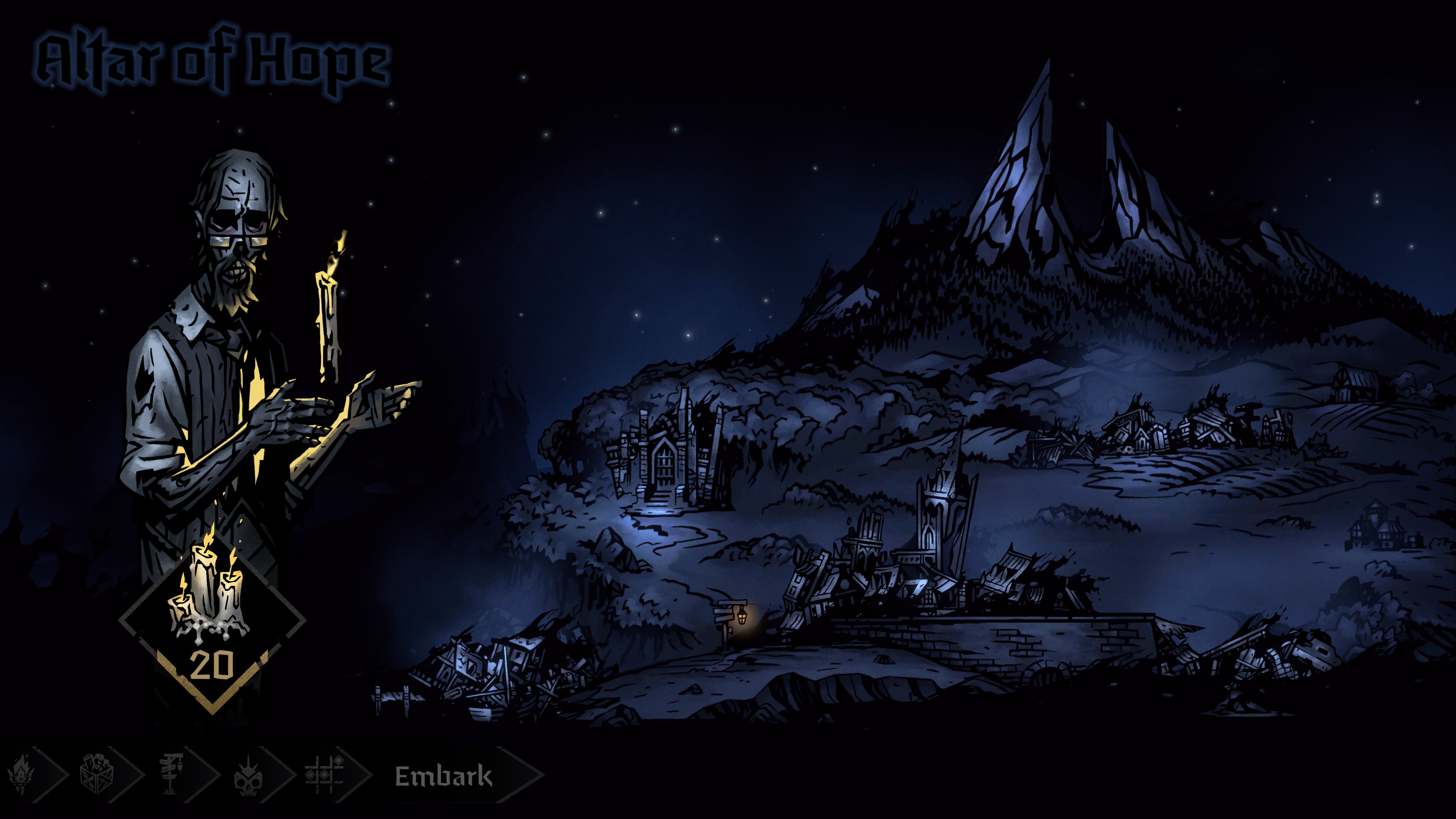 The Altar of Hope Update introduces a massive new progression system to Darkest Dungeon II which allows you to invest in upgrades, perks, and unlocks that suit your play style and strategy.

On your Expeditions, you will collect Candles of Hope by completing objectives, progressing through areas, and defeating evils along the way.  In true Darkest Dungeon fashion, the best results come from daring deeds. You’ll also need to choose when to take a safer path.

The best rewards can be gained by making it all the way to the Confession boss. Of course, this is not always possible. Fortunately, Candles can be earned with incremental successes as well.

Ultimately, the decision of whether or not to press forward after a moment’s sanctuary at the Inn should be something that weighs heavily when tending to your party and surveying what challenges lie ahead. There is no shame in ending your Expedition here, carrying your Candles home, and spending them on upgrades at the Altar. It is crucial to recollect more of what has been forgotten to the darkness. Eventually, you will find yourself making it farther and farther on each journey, until you ultimately reach the Mountain.

For more information on the Altar of Hope, refer to this BLOG POST 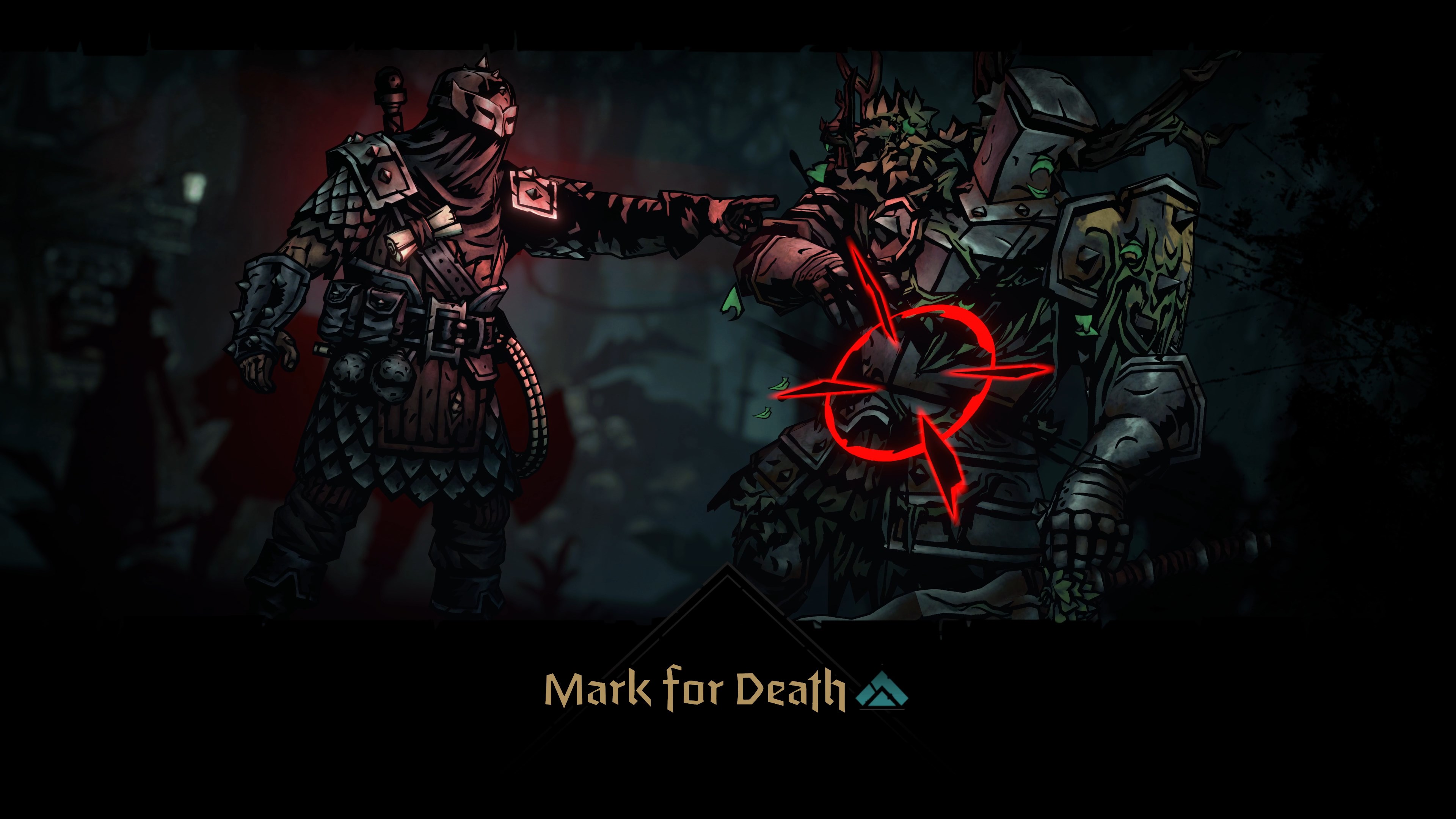 A New Ally, The Bounty Hunter

Unlike the core group of adventurers who rally at the Crossroads, the Bounty Hunter wanders from Inn to Inn, in search of his next job.  If you are lucky enough to stumble upon him, and are willing to pay the price, he will replace one of your active heroes for the duration of the next region.

A consummate professional, the Bounty Hunter will not gain or lose affinity with the party.  He is here to do his job, and has no interest in fostering friendships, or petty bickering.  He is still vulnerable to stress, however, as any sane person should be.

For more information on the Bounty Hunter, refer to this BLOG POST.

This is part of a larger effort to provide more texture to the expedition from Valley to Mountain. We will be monitoring feedback, so let us know how you feel!

Despite Ordainment and some other behind-the-scenes mechanics (e.g. concentration of easier battles spawned in region 1; greater proportion of harder battles spawned in region 3) we still would like to explore ways to make the difficulty curve of the expedition less front-loaded. Slightly shortening the first region and lengthening the last region helps this, in addition to providing variety. Region 1 is crucial for early Candle-gathering for new players.

Related to the length tuning, we have also adjusted some location generation limits to provide additional texture:

We are also experimenting with making each region feel different in paths and contents.

We did a full audit of all battle-based loot, as it had been a while and we wanted to strengthen the identity of various fights as well as make some adjustments based upon the recent community loot survey.

The Infernal Flame now awards scoring bonuses and is obtained differently. (Note: this is step 1 in a larger plan to add more optional difficulty modifiers later.)